Dave Chisholm was the expert guitarist on Take Route. He and Di performed in folk clubs and venues around Manchester until 2014. Shortly after this site was published he contacted Norman to share his memories. 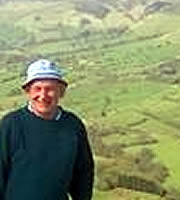 I first encountered Diana in the early 1980s after placing an advert for a singer in the style of the folk rock group Fairport Convention. As this was more in hope than expectation, I was pleasantly surprised when Diana turned up. Not only did she know the Fairport songs, she also bore a passing resemblance to Sandy Denny, their most notable lead singer.

Di had a sweet voice, was accomplished on the tin whistle and had a prodigious memory for song lyrics. I also soon discovered that she was a gifted poet and songwriter and we set to work rehearsing and recording the songs for her album Take Route. This was certainly an interesting time for me, as I used to take afternoons off work to go down to the BBC studios on Oxford Road where Di’s brother Alan was a recording engineer. Here Alan recorded us and other musicians who appeared on the album in what were euphemistically dubbed “training sessions”!

After the album was completed, Diana and I did a few gigs around Manchester to promote it and it was generally well received. However, Di ever restless, moved onto other projects. She played for a time in the excellent women’s band Beyond the Glass and later in an accapella group. I was aware through occasional encounters that she’d married Ali Moussa, an Egyptian, but we rather lost touch for a number of years.

Our paths next crossed again in the late 1990s when we met by chance at a music venue in Stockport where we’d both moved. Diana had been playing around the local folk clubs and invited me to join her on guitar. We took part in regular sing arounds at venues such as the Crown and Red Bull (later the Midway) folk clubs in Stockport with occasional forays further afield.

Also around this time we got together with two other musicians, Mike Crumpton and Ric Gibbs to form the band Out of the Woodwork. This resulted in a demo CD (recorded in 2002) and we played a number of gigs in and around Manchester and Stockport. The gigs became a little sporadic as band members moved onto other projects but the name never quite died and we still managed the occasional concert even as Diana’s health started to falter, the latest I can recall being in 2014.

Unfortunately as Di’s health declined, her mobility also suffered and certain venues became inaccessible to her as she was unable to climb stairs any more. This more or less put an end to the folk club outings. However she remained determinedly active in various pursuits with her gift for arts and crafts, teaching at the Bosnian School in Manchester and taking part in the weekly quiz at the Arden Arms in Stockport where Di and her Zimmer frame were a regular sight!

Although I was aware that her health was declining, it was still a tremendous shock when I learnt that she had died. She had carried on in life with her customary determination, despite being in obvious discomfort. I admired her indomitable spirit and it never occurred to me that she would not be around one day.

I remember her as a quietly spoken yet determined soul who was unusually gifted in music and the arts. She was absolutely fearless in expressing her talents and beliefs and a true friend to those whom she cared about. My life is the poorer for her passing.